Tourmaline is a sauna series that combines Carbon fiber heaters with tourmaline stones.

The stones are stylishly placed in rows along the carbon fiber heaters behind a sauna built-in backrest.

Tourmaline is a naturally occurring mineral with unique electrical properties that is the background to the many positive health effects associated with this remarkable stone.

Tourmaline is known to generate a weak electric current, which produces infrared rays and converts moisture in the air into negative ions.
Unlike mechanically produced negative ions, they are naturally generated by tourmaline. It is these negative ions that are one of the main reasons for them are many beneficial effects of the mineral

The naturally produced negative ions put the body in a weakly alkaline state, which is optimal for health.

Health effects - worn on the body, tourmaline is thought to prevent cholesterol coagulation and builds up in the blood vessels. Cells throughout the body are enhanced and immune function is enhanced by tourmaline. It is also thought to cleanse the blood, stimulate the autonomic nervous system, calm stressed nerves, and promote good sleep. 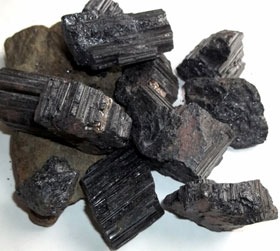 In our sauna series with Tourmaline, we offer a sauna where the infrared Carbon fiber heaters are combined with tourmaline stones. Tourmaline is a mineral that has many special properties and has long been considered health-promoting. Tourmaline is a natural mineral composed of potassium, sodium, magnesium and copper.
Of all the minerals that exist on earth, Tourmaline is unique in that it has a permanent pyroelectric capacity, ie receives an electric charge when heated. The change in temperature means that positive and negative charges move to opposite sides through so-called migration and thus an electric field is established.
Tourmaline has consequently been called the mysterious crystal of polarity. Whether the stone is ground or crushed, it can still transmit current.

The Tormalin stones emit negative ions, which gives a clean and fresh air in the sauna. The weak current that tourmaline generates converts the moisture in the air into negative ions in a completely natural way. Particles in the air are attracted to the negative ions, often called anions, and attach to them. Particles in the air get stuck on these ions and become charged through this. Gradually, more particles have clumped together and when it becomes too heavy, it falls down. The now charged particles end up on the floor or other surfaces that you can dust off. This removes the airborne polluting particles from the air and does not end up in the body via our lung system. * (An ion is an atom or molecule that has an excess or deficit of electrical charge. A negatively charged ion is called anion).
Suppresses electromagnetic fields.
In recent years, tourmaline has been carefully investigated for its potential to counteract the effects of electromagnetic fields, which are thought to be harmful. Researchers suspect that the weak electric current generated by tourmaline attenuates electromagnetic fields in the immediate vicinity. 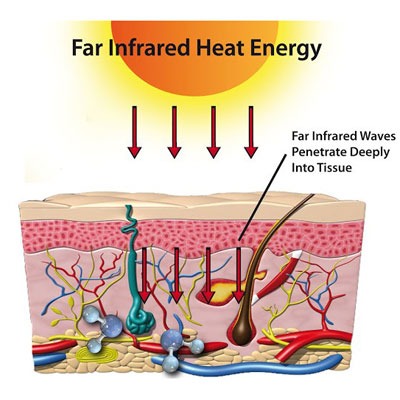 Tourmaline also has the unique property of emitting natural radiation in the form of long-wave infrared energy. Water can absorb infrared radiation from an external source. This phenomenon is called resonance absorption. The body easily absorbs the infrared rays. These rays help to dilate the capillaries and thereby improve blood circulation and provide an improved immune system. The body changes to a weakly alkaline state, which gives beneficial effects such as revitalization of the cells, improved metabolism, relief of fatigue, fatigue and pain, etc.

A number of diseases are considered to be derived from unbalanced pH in the body. An incorrect acid base balance affects all functions in the body, e.g. energy production, immune system, nervous system, hormonal system detoxification and stress levels.
What you want to avoid is a too low pH, our lifestyle gives us an excess of acid in our bodies. This excess burdens the body more and more and eventually generates damage to tissues, organs and general condition.
We live and die at the cellular level. Our bodies are made up of about 75 trillion cells. In order for these cells to remain healthy and produce energy, they must live in a weakly alkaline environment (the body fluids).
Leading biochemists and medical physiologists have recognized the balance of acidity and alkalinity as the most important aspect of a physical body. They have long known that maintaining an alkaline pH is critical to cellular health.
The end product of cellular metabolism is acidic metabolic waste something produced by all cells that perform their own respiratory function themselves. Our body system works to make our blood and fluids that surround our cells slightly alkaline.
The process of metabolism, digestion and incineration of food & waste products, these waste products are acidic. Under the best conditions, we get rid of the acidic waste products through breathing, the kidneys, the intestines and the skin.

Even under the best conditions with diets containing alkaline-promoting foods and regular exercise, the acidic waste products accumulate in our bodies.
Air pollution, processed foods, pesticides (pesticides) and too much stress help build waste. Facilitating and creating an environment where the body for support to reach an alkaline state can then effects mentioned above and create health and well-being. We have both infrared heating mattress and infrared body warmers with tourmaline stones.